So if any of you are fans of anime, you may have seen a show called Azumanga Daioh. One of the iconic episodes of this series is when they are hosting the cultural festival at the school (https://www.youtube.com/watch?v=3nCO_SoNQMw), and the classes have to come up with themes for their rooms such as cafe’s, Haunted Houses, and other cool ideas.

I’m glad to say that this is an actual event that schools do, and I was fortunate enough to be able to attend one at Andrea’s school.

Let me preface by saying that these cultural fests are more like club festival nights that are hosted at Schools in the USA where the school clubs, such as Art, FCA, etc. will host fairs with different attractions, games, and events such as cake dances and face painting. 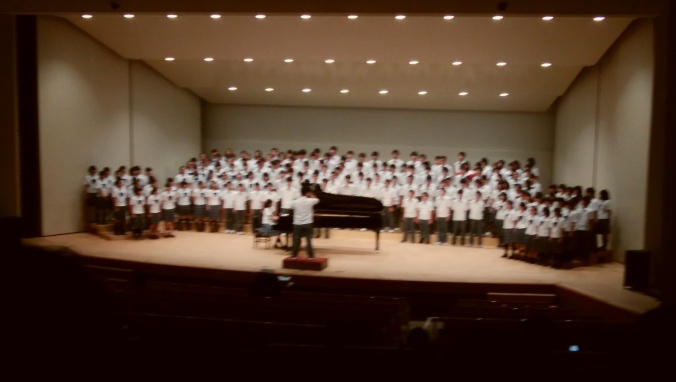 The opening day is a bit more academic and consists of student made films, book battles (bibliobattle.jp) and school choir performances. Since these are student films, they draw heavily from pop culture, and since I can’t speak Japanese, I had to rely on my knowledge of anime to get the films. Time spent watching Detective Conan and Death Note were not wasted.

The second day is where most of the planning and effort goes into, as this is the festival that’s open to the community.

The main attraction of these festivals (As with most Japanese Festivals) is the food and drink selection. There were plenty of choices to pick from, with more traditionaland the kids had a lot more freedom than they would in the States, especially considering one table was making Mock-Tails including fake mojitos. And as with the Azumanga Daioh episode, they advertise by walking around and sometimes yelling. Very Loudly. Often at each other during stage presentations.

One of my favorites was the shooting gallery at the “ShatteKissa” (Translated as “Shoot Up the Coffee Shop”0_0) where you shot at paper targets to try and win pancakes with ice cream on top.

Yes. It was worth it.

Outside of food and games, they had several stage performances with music, science presentations, and dances performed by girls, and then later with boys dressed as girls (wait, what?).

I don’t have pictures, but you’ll have to take my word on that one.

The day ended with a homemade bonfire (キャンプファイヤーPronounced Kamp-Faiya = Campfire) and some fireworks. Nothing big, just enough to quench the thirst of backyard pyromaniacs.

(Pic of the Fire)

If you’re ever in Japan, and know someone that’s an ALT at a Jr High or High School, I highly recommend asking them if you can attend these yearly events, usually held in the fall.

Until next time, STAY AWESOME!